When analyzing data in FS-FAST, you need to set up your data in a particular way (the "data hierarchy"). FS-FAST will expect the data to be stored in a certain directory structure with a certain naming convention. When you issue an FS-FAST command, it will then know where to find the data to be analyzed and where to put the result.

The Sessions Format is a structure that demands a certain file and directory naming convention for the scanning acquisitions (sessions). There is some flexibility in how you name the individual files and directories in this Format, but the naming of the sessions must conform exactly to the convention outlined here in order for FsFast to work. New files and directories will be automatically added to this structure during each stage of FsFast processing. Here is a look at Bert's Sessions Format: 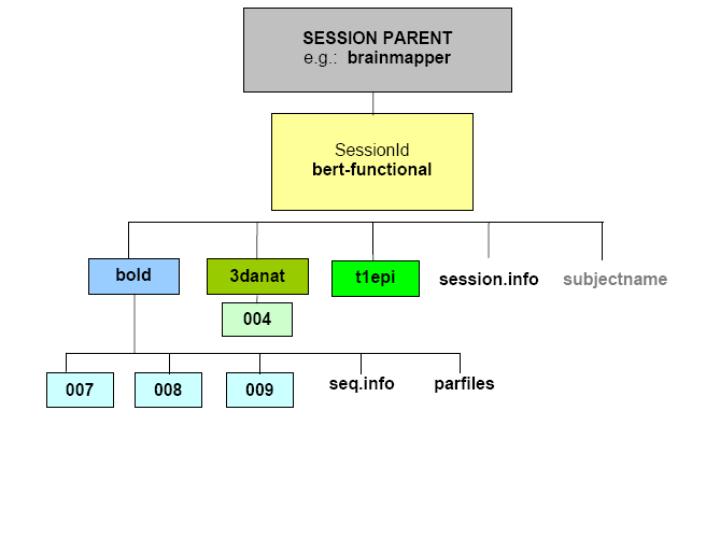 SESSION PARENT: This is the directory to where you unpack subjects' individual session directories, e.g., 'bert-functional.' You can call it whatever you like, e.g., 'brainmapper.'

bold: This is the functional subdirectory. It contains the individual run(s) of functional MRI data; each of which must be named by three-digit, zero-padded numbers (e.g., 007, 008, 009) in order for FsFast to recognize them as functional data directories. (Although not applicable in this case, if this directory were named something other than 'bold,' FsFast would require modifications to further steps in the processing stream. These variations are described in the FsFastGuide.)

3danat: This directory contains any raw structural MR data collected during the session, and stores it in COR format. Each volume/structural run should be in an individual subdirectory.

t1epi: This directory contains the t1-weighted EPI image data collected during the session, whose slice prescription must be identical to that of the functional data. Bert's actual t1epi volume is stored in a subdirectory called 004 in bshort format, with a stem called 'f.'

subjectname: This text file contains the subject identifier string (i.e., the name of the directory containing the subject's anatomical directory, e.g., 'bert-anatomical'), and nothing else. You will create this text file in a subsequent step.

seq.info: This text file contains details such as the scanning protocol used during the scan, date of scan, etc.