Differences between revisions 17 and 18

You will need to decide how much to smooth the data and whether you want to do slice-timing correction. In this analysis, we will smooth the data by 5mm Full-Width/Half-Max (FWHM) and correct for slice timing. The slice-timing for this particular data set was 'Ascending', meaning that the first slice was acquired first, the second slice was acquired second, etc. To preprocess the data, run:

This data has already been preprocessed, so it should just verify that it is up-to-date, finishing in a few seconds. This command has several arguments: 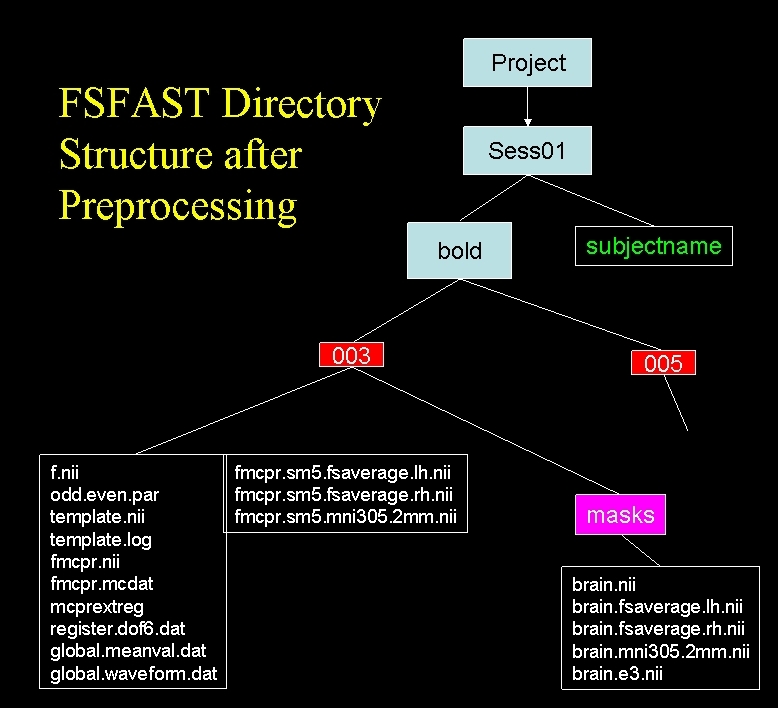 The motion plots can be viewed with:

Go back into one of the run directories and see what preproc-sess creates. To do this,

The brain.nii.gz is used to constrain voxel-wise operations. The eroded mask (brain.e3.nii.gz) is used to compute the mean functional value used for intensity normalization and global mean time course. There are other masks there that we will get to later.

Each of these is the entire 4D functional data set resampled into the common space. The spatial smoothing is performed after resampling. Surface-based (2D) smoothing is used for the surfaces; 3D for the volumes.

Check the dimensions of the MNI305 space volume:

Check the dimensions of the Left Hemisphere 'volume':

The 'resolution' is '1.0 1.0 1.0 2000'. The values for the first 3 dimensions are meaningless because there are no columns, rows, or slices on the surface so the distances between them are meaningless. The last value indicates the time between frames and is still accurate (2 sec).

The transformation to this space is based on the surface-based intersubject registration created during the FreeSurfer reconstruction.