Back to Top Tutorial Page
Back to Multimodal Top

The purpose of this tutorial is to get you acquainted with the concepts need to perform fMRI integration in FreeSurfer by interacting with the data from an individual subject. You will not learn how to perform fMRI analysis here; that knowledge is already assumed. This tutorial also does not assume any particular directory strucutre (as would happen in FS-FAST). This tutorial makes use of data from the Functional Biomedical Informatics Research Network (fBIRN, www.nbirn.net).

In fMRI, stimuli are presented to a subject, which creates a BOLD hemodynamic response function (HRF) in certain areas of the brain. The analysis is performed by first performing motion correction, then correlating each voxel's time course with the stimulus schedule convolved with an assumed HRF shape. The result is an estimate of the HRF amplitude for each condition at each voxel, contrasts of the HRF amplitudes of various conditions, the variance of this contrast, and some measure of the signficance (eg, p, t, F, or z) map. All these maps are aligned with the motion correction template (from the functional analysis), which should be used as the registration template.

This is one of 5 subjects from the fBIRN Phase I acquisition. The subjects are called fbirn-10?, where "?" is 1, 3, 4, 5, 6 (note that #2 is missing). Each has a FreeSurfer reconstruction by the name fbirn-anat-10?.v4 (anat is short for anatomical and v4 indicates the version of FreeSurfer it was run with). This tutorial will only deal with subject fbirn-101 (but you can run the same commands on any of the subjects).

The data are the results from a sensorimotor paradigm (flashing checkerboard, audible tone, and finger tapping). The raw fMRI data were motion corrected but not smoothed. Each subject has four volumes (output from the fMRI analysis, which in this case, was done with FS-FAST):

First (and always), check the registration (we learned how to register the functional volume and anatomical surfaces in the Registration Tutorial - in this case bb.register.dat is the output of that step).

This registration should already be good, so there is no need to make any modifications.

Note: This command will load this subject's anatomical data - orig.mgz and brain.mgz as well as the cortical and subcortical segmentations (all output from recon-all). We load the significance map (again, output from the fMRI analysis) and the registration file we created earlier so that the sig map is correctly overlaid on the anatomical data.

You can now scroll through this subject to see what areas of the brain show a significant value. 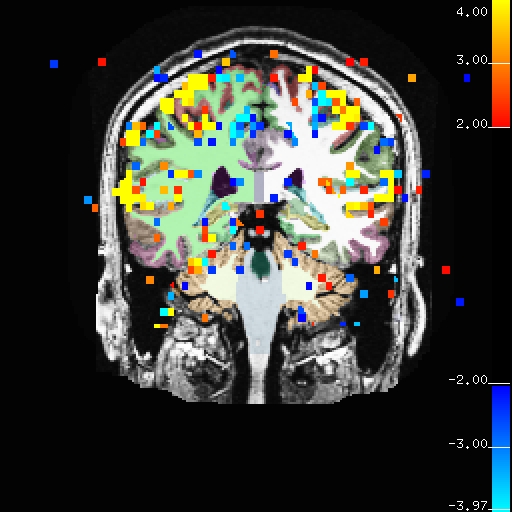 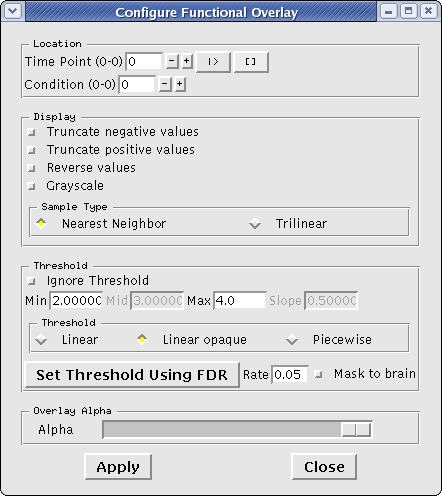 Before you can view the fMRI data on the (inflated) surface, you must resample the data onto the surface:

The output is lh.sig.mgh the significance sampled onto the left hemisphere. It has the same size as any other surface overlay for this subject, eg, lh.thickness. To see it's dimensions, run:

To actually view the significance sampled on the lh: 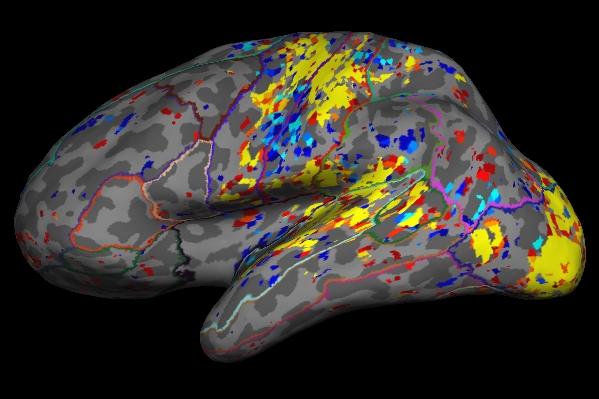 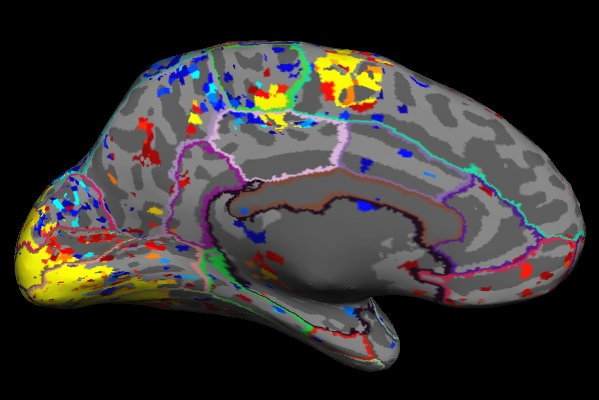 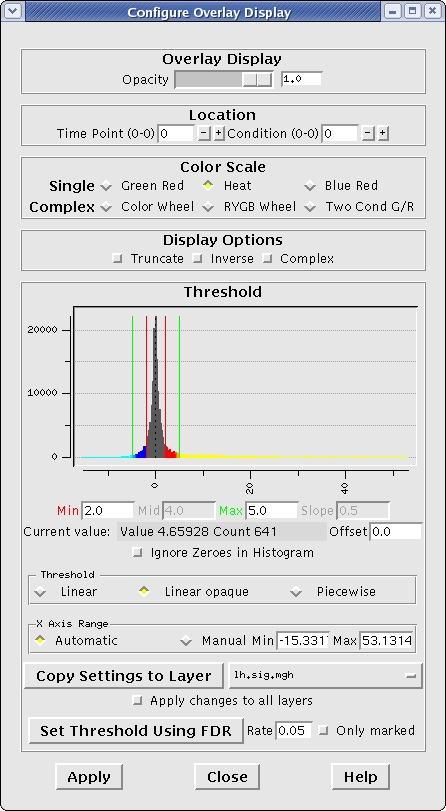 ROI Analysis without a Functional Constraint

In this section, we will compute the average HRF contrast (ces) in some ROIs. First, we need to resample the ces.nii volume into the individual's anatomical space:

The output is ces.anat.bb.mgh. Look at it's dimensions:

Note that it is 256x256x256 with each voxel being 1mm isotropic. This is the same size as the FreeSurfer anatomical.

Look at the output ces.bb.stats in a text viewer (or click here). It has a format very similar to the aseg.stats file in each subject's stats directory. The "Mean" here is the average HRF amplitude in the given ROI in raw MR units. Eg, the average HRF amplitude in ctx-lh-pericalcarine is 112.9913. Note that the volume is 2586.0 mm3; this is the volume of the ctx-lh-pericalcarine segmentation.

In this section, we will compute the average HRF contrast (ces) in anatomical ROIs constrained by functional activation. First, we need to resample the sig.nii volume into the individual's anatomical space:

Now run the segmentation statistics with the functional constraint:

In this section, we will compute the average HRF contrast (ces) in anatomical ROIs constrained by positive functional activation only. Run the segmentation statistics with the functional constraint:

Look at the output ces.pos-masked.bb.stats in a text viewer (or click here). The "Mean" for ctx-lh-pericalcarine is now 198.2415, an increase of 10% over the unsigned case. The increase is because some of the voxels in the unsigned case are negative and so reduce the ROI average. Note that the volume has dropped to 1408.0 mm3 because the negative voxels have been removed. Note: in this case the Mean will always be positive because we have constrained it that way!