The statistical parametric map created from the group analysis can be loaded into tksurfer for visualizing as an overlay on the average surface, and inspecting either vertex-by-vertex, or within a defined region of interest (ROI). In particular, tksurfer is able to configure the colormap, to threshold the statistical parametric map and to plot correlation between classes or variables for both a single vertex and ROI. In these exercises, tksurfer will be used to visualize and inspect results in a number of ways.

Using the precomputed average surface, the following exercise shows how to load the statistical parametric map as an overlay in tksurfer, how to configure the colormap and threshold the parametric map, and how to plot correlation dynamically while interactively clicking surface vertices. The example below demonstrates how to view the pre-computed result from the left hemisphere (lh) mapping. To view the right hemisphere (rh) result, replace lh with rh in the commands and file names below.

In this example, the statistical parametric map will be overlayed onto the average surface. Before you begin you should be sure your SUBJECTS_DIR is set appropriately:

To load the average surface into tksurfer, run the following commands:

Tksurfer will display a dark grey inflated surface in its display window. You will probably find it easier to have a curvature file loaded when you look at the statistical maps. To load in the lh.sulc file hit ctrl and right click the curvature button

and type lh.sulc into the dialogue box. Then load the lh map as an overlay: from the tools window, load in file stats/lh.gender_age.glmdir/age/sig.mgh in the stats directory by hitting ctrl and right clicking the overlay button

. Check the button that says "Calculate Identity Matrix". The display window should look something like the image shown below. The surface and overlay can be viewed from different angles in the Display Window by clicking tksurfer's orientation icons. 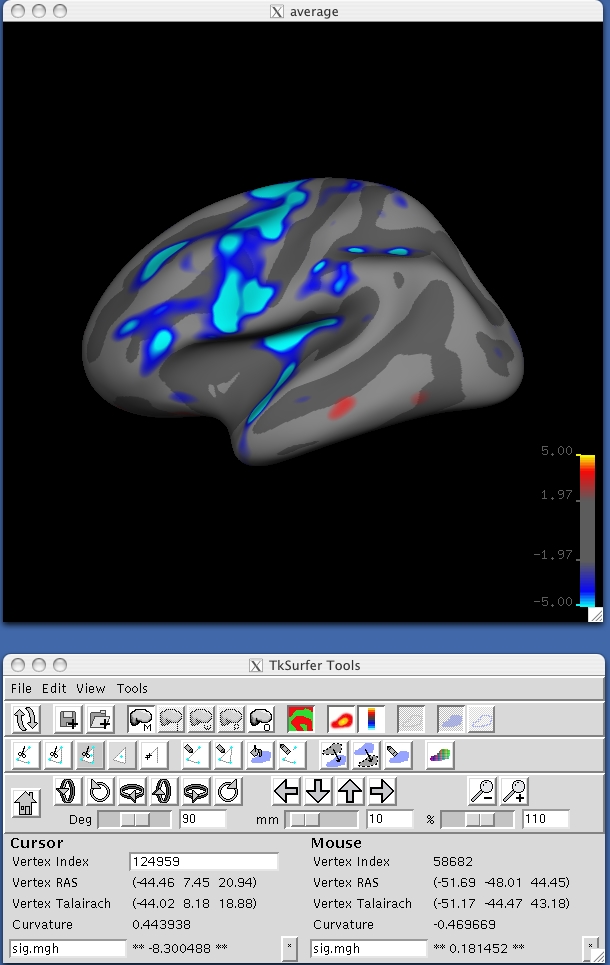 Next, load FSGD file lh.gender_age.glmdir/y.fsgd in the same directory by selecting File -> Load Group Descriptor File. At first, an empty plot will be displayed in a separate window. To generate a plot for a particular vertex, select a point by clicking on the parametric map at that vertex and the plot window will be updated accordingly. Rolling the mouse over data points on the plot will display the corresponding subject ID. Take some time to plot and inspect results for different vertices, both in significant regions of the parametric map and elsewhere. The plot window should look something like the image below: 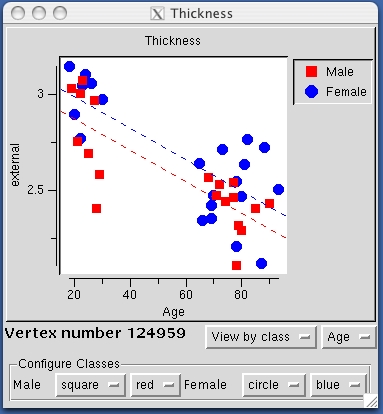 Thresholding and Setting the Color Scale

The parametric maps's colormap can also be configured for display by selecting View -> Configure -> Overlay. This action brings up a new GUI panel which displays a histogram of the overlay's values, and allows values for min, max, mid and slope to be set as shown below. Experiment with these settings to see how they affect the display.

When setting a color scale, you're basically interested in two things: the threshold (ie, the value below which the voxel will be transparent), and the saturation point (ie, the value beyond which the color will not change). In tkmedit/surfer, there is an extra degree of freedom which allows the color scale to be divided into two parts, each with a different rate of color change. This extra flexibility is more of a curse than a benefit as most people are only interested in having a uniform change in color across the color scale.There are three color scale parameters in tkmedit/tksurfer:


Note that this forces the slope between fthresh and fmid to be the same as between fmid and the saturation level.

The meaning of these thresholds depends upon the nature of the data you have loaded as the overlay. Eg, the map you are currently viewing is -log10(p), where p is the significance, so a threshold of 2 will display all vertices with p<.01. 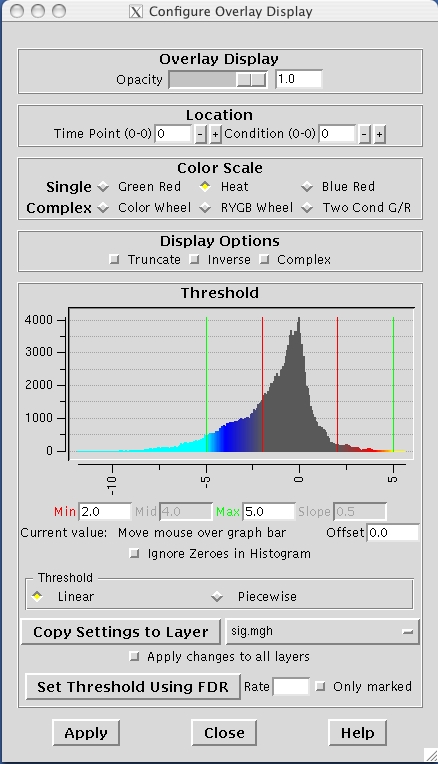 FDR is built directly into the tksurfer interface. To use it, choose your desired FDR, enter it into the the FDR entry box and hit "Set Threshold Using FDR". tksurfer will compute the threshold needed to realize this FDR. See how the Min threshold changes. Hit "Apply" to change the threshold applied to the map. Note: the values in the map MUST be -log10(p-value). This is the form of the output from mris_glm.

Defining a region of interest (ROI)

Tksurfer has the ability to compute and display statistics averaged over a defined region of interest (ROI), which is another popular way to test statistical hypotheses. The following exercise shows how to define, fill, select and plot statistics for an ROI. To define a label that marks a region of interest (ROI) on the surface, first right click in the graphics window to clear any marked vertices. To outline the region that the label should be drawn, make a series of left clicks on the surface. Then click the "Make Closed Fill Boundary" icon in the tools window

. This should connect the points you clicked, drawing a yellow or red line between them. If it seems to hang for a while, press Ctrl-c to cancel the line and try again. The ROI should look like the one shown outlined in red in the image below: 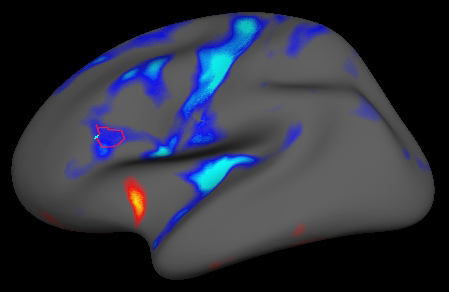 To fill the label, click once in the middle of the polygon and then click on the "Custom Fill" icon

. This action will raise a dialog box with several fill options. Select the one that says "Up to and including paths" and then click the fill button. As a result, the ROI should appear like this: 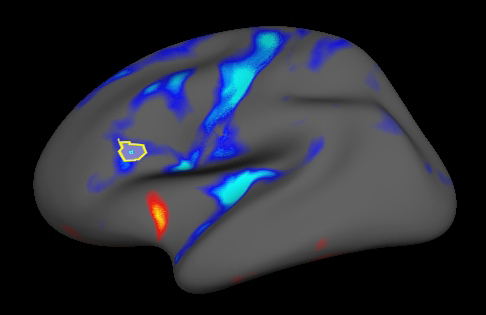 In order to plot statistics averaged over this new ROI, first select the label using Tools -> Labels -> Mark Selected Label. Tksurfer indicates that the ROI is selected with the label's background color turns to white as shown below: 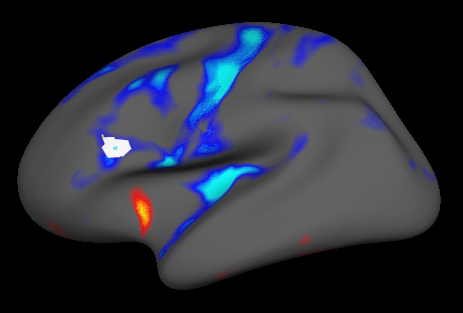 Now select Tools -> Group -> Graph Marked Vertices Avg to update the plot with the data averaged over the selected ROI: 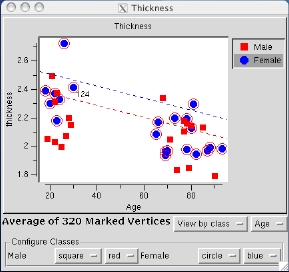 Mapping an ROI from one subject to another

After defining an ROI(<labelname>) on a subject(<source>), that ROI can then be mapped to another subject(<target>) with the command: