For each new terminal that you open, you must do:

The diffusion MRI contrast is designed to detect the microscopic motion of water molecules. Unfortunately this makes diffusion MRI particularly sensitive to head motion. Head motion does not result only in misalignment between consecutive DWIs, which could be corrected by registering the DWIs to each other. It can also alter the intensities of the DWIs, and this cannot be corrected by registration. The quality assessment step in TRACULA computes four measures of head motion that summarize the above effects. To see an example of these motion measures for one scan, run:

Our subject was pretty well-behaved. These motion measures can be used to ensure that groups of subjects are matched with respect to head motion, or to introduce head motion as a nuissance regressor in group analyses. For more information, see Yendiki et al. 2014.

If you want a more detailed break down of motion measures during the scan, run:

This file contains motion measures for each DWI volume of this subject:

Even though TRACULA relies on the ball-and-stick model instead of the tensor model to reconstruct tracts, the outputs of the tensor fit, especially anisotropy and diffusivity maps, are still useful for group analysis. In addition to the tract-based analysis that can be performed on the tract-based averages of anisotropy and diffusivity, the same maps could also be used for ROI-based or even voxel-based group analyses.

The maps produced by the diffusion tensor fit can be found in the dmri directory which was created when trac-all -prep was run. Let's list these files for subject1:

One can use freeview to view the FA map for subject1, overlaid with the subject's anatomical segmentation, which has been mapped from T1 to diffusion space. This is a good way to check the quality of the intra-subject registration. You can do this with the command below:

Note: The above assumed that bbregister was used for the intra-subject registration. If FLIRT was used, the transformed FA map would be called aparc+aseg.flt.nii.gz instead. 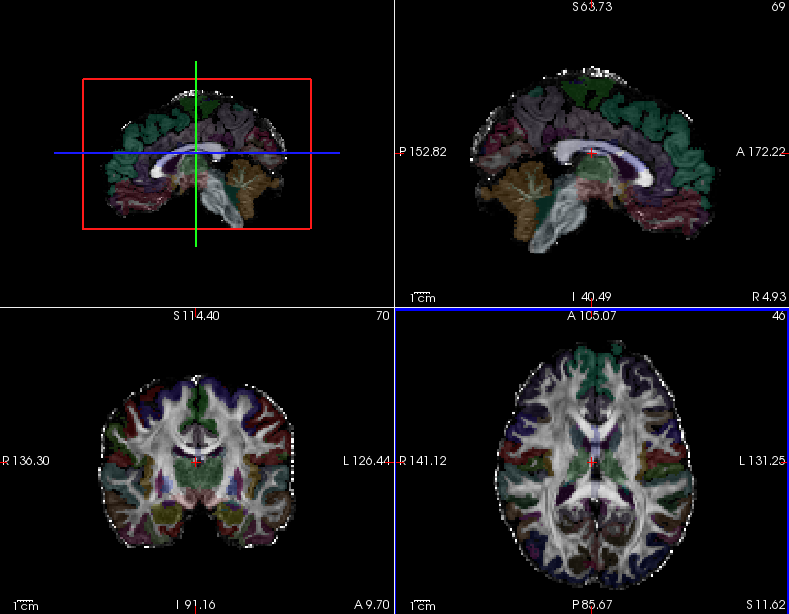 Hover your mouse on different voxels throughout the image and notice the FA value change in the bottom toolbar. Look for areas of low FA and areas of high FA. Scroll through the slices using the Page Up and Page Down buttons (or up and down arrows). Feel free to change the contrast by holding down Shift and the left mouse button while dragging the mouse across the viewer window. When you are done, hit the X in the top right to close freeview.

To see the correspondence between the FA and anatomical segmentation in diffusion space and check the accuracy of the intra-subject registration, toggle between the two images by using the 'Alt + C' hot key.

Alternatively, you can adjust the opacity:

). Use the orientation buttons to switch the plane (

). Put your cursor at the edge of a gyrus or ventricle as a landmark before toggling back and forth between the two volumes. Scroll through the slices and try it again on a different section of the brain. Notice how accurate the registration is - the subject's anatomy should line up well between the FA map and the segmentation. When you are done, be sure to close freeview again.

To visualize the posterior distribution of the inferior longitudinal fasiculus (ILF), do the following: 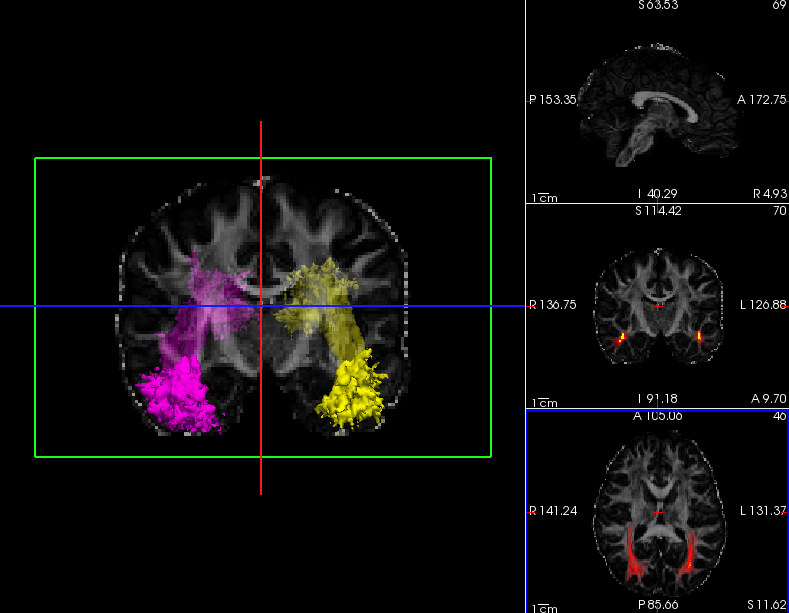 )to view isosurfaces of the left and right ILF. Use the 1x1 button (

Here we chose to threshold the isosurface display at a very low value (1, which corresponds to the lowest probability voxels). Select either the rh.ilf or the lh.ilf volume by clicking on its name in the panel with the list of volumes on the left. You can then adjust the isosurface threshold to view higher or lower probability parts of the left or right ILF.

This threshold also adjusts the heatmap display of the posterior distribution of the ILF in the slice (non-3D) views. You'll want to go back to one of the slice views (

) to see the effect.

Close freeview when you are done.

TRACULA also saves a probability map for each endpoint of each tract and, for cortical endpoints, projects that map to the cortical surface. These are saved as FreeSurfer .label files, which can be display on the FreeSurfer surface reconstruction.

To display the cortical endpoints of the left uncinate fasciculus (UF) on the inflated surface, run: 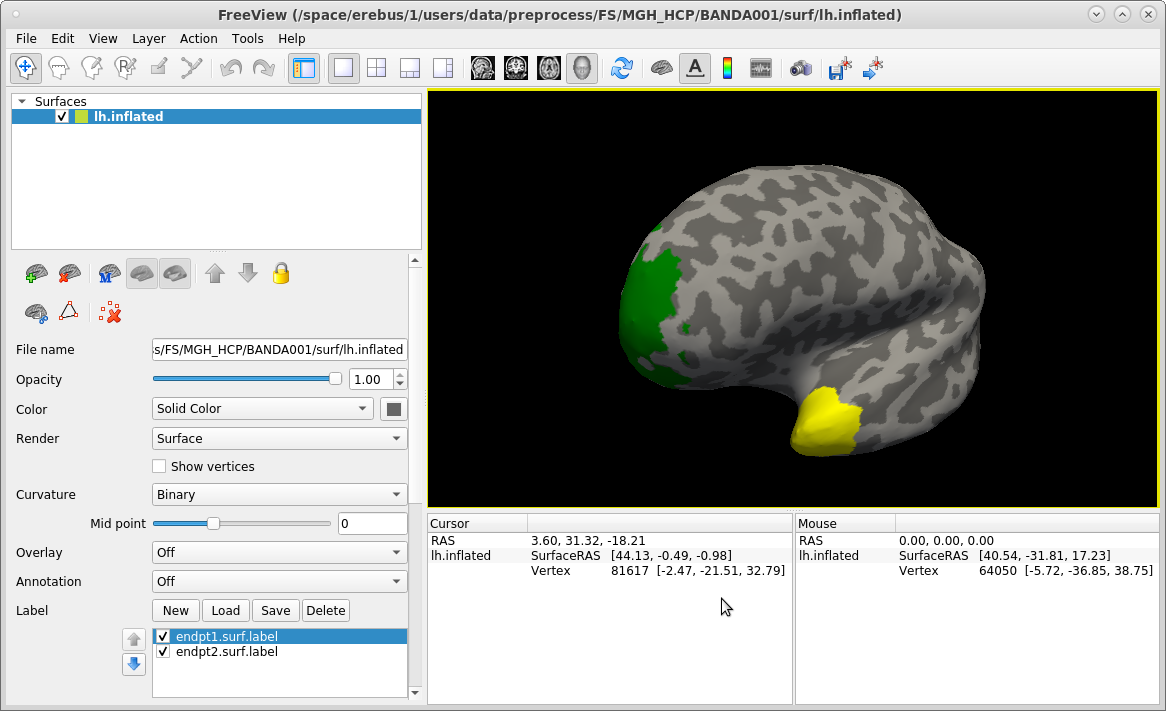 Visualizing the probability distributions of all white-matter pathways simultaneously

TRACULA also outputs a merged 4D volume, which is a concatenation of the probability distributions of all the pathways that were reconstructed. To visualize all pathways at once, open this merged 4D volume in freeview using the -tv (tract volume) option:

The screenshot below shows the ventral surface of the brain in the 3D view: 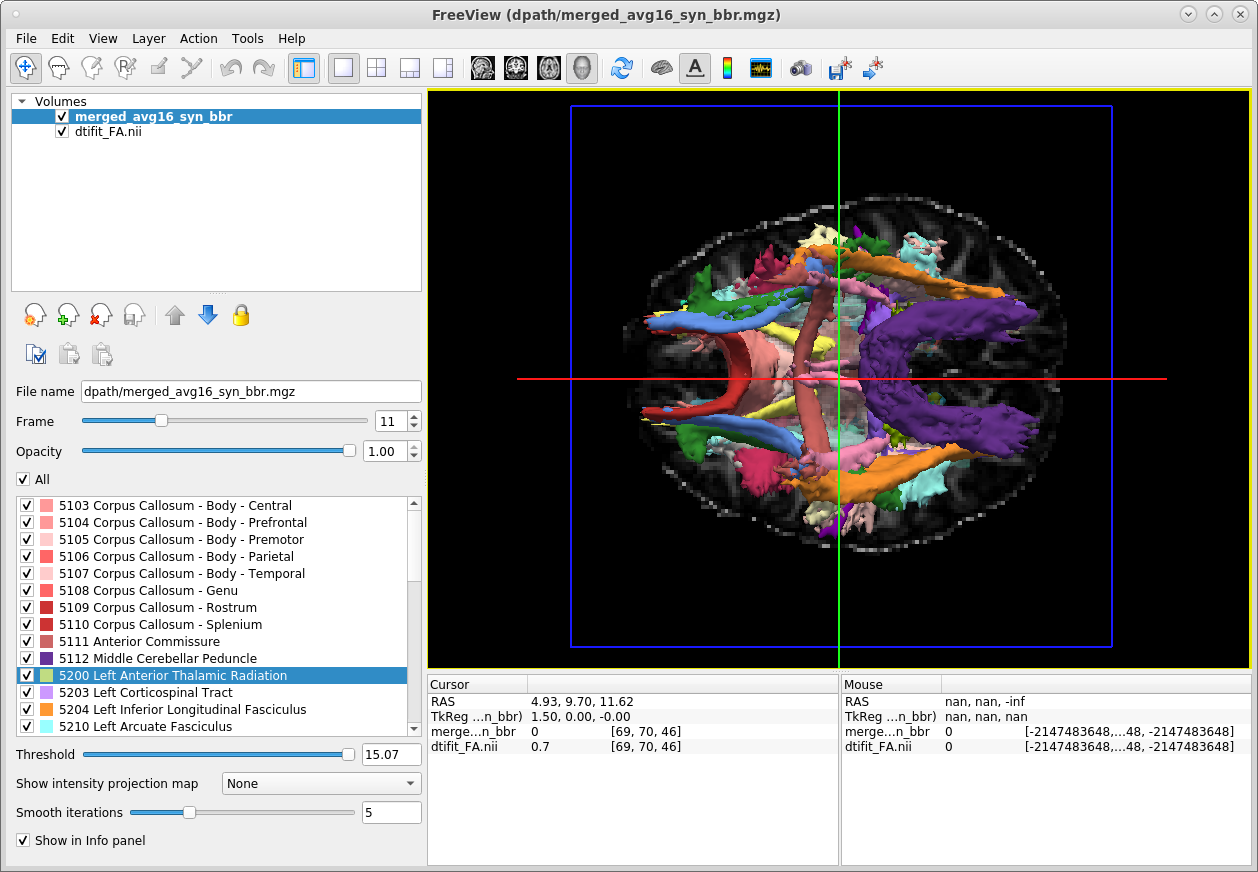 The panel in the lower-left corner of the freeview display gives the color lookup table for all the tracts. When we use the -tv option to visualize the merged tract volume, each tract in this volume is displayed at 20% of its peak probability, by default. This is a higher threshold that what we used to visualize the ILF in the previous example. This higher threshold allows a larger number of tracts to be visible, but it means that the posterior distribution of every individual tract is not displayed in its entirety.

The threshold at which each tract is displayed in both the 3D and non-3D views can be adjusted by selecting a specific tract from the panel with the tract lookup table on the left, and adjusting the threshold slider under the panel.

When you are done, close freeview.

Now that you've seen what the output looks like, you can take a look at the resulting stats for each tract by clicking on the Next button below.

By the end of this page, you should know how to: