Differences between revisions 10 and 11

The estimated total intracranial volume (ICV) calculation is based on this work:

Basically, total intracranial volume is found to correlate with the determinant of the transform matrix used to align an image with an atlas. The work demonstrates that a one-parameter scaling factor provides a reasonable TIV estimation.

mri_label_volume requires as input the subjects:

Both of these are created by the standard recon-all stream (during -autorecon1 and -autorecon2).

Once those files are available, the command-line to issue is:

where $sdir is the path to the subject's mri directory (ie, $SUBJECTS_DIR/<subjid>/mri). The '17' and '53' are label ID's, in this case left and right hippocampus (see the subjects /stats/aseg.stats file for IDs). The output will look like:

In the source code file utils/mri.c, the static variable 'eTIV_scale_factor' is multiplied by the atlas TIV to arrive at the subjects eTIV. The value for eTIV_scale_factor is determined by finding the best fit of the eTIV of 22 reference subjects against their known TIV (determined manually via their T2 scans, which clearly show skull). These subjects are found in /autofs/space/jc_001/users/nicks/subjects/SASHA.

In that SASHA directory, in the the scripts directory, the script run_rb.csh will run the mri_label_volume binary and generate a matlab data file called det_eTIV_matdat.m which contains the determinant and eTIV data. Then, the matlab script plot_det.m plots the determinant against the manual TIV, and also the eTIV against manual TIV, for each subject. The file ICVnative_matdat.m contains the manual TIV data, copied from the ICVnative column in the file buckner_tiv.txt, which originates from the people performing the manual TIV measurements.

The determinant vs. manual TIV plot is shown here: 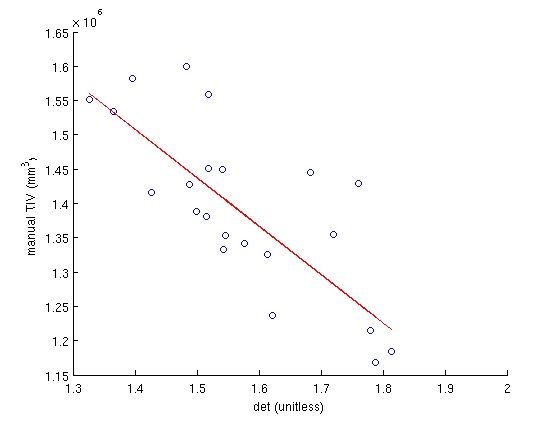 The red line in the plot is the best fit to the points, and validates the assumption that there is a simple linear correlation between TIV and a single parameter (the determinant of the transform matrix aligning the subject to an atlas).

The value of the determinant is not itself the scale factor. Rather, this is determined iteratively via the eTIV vs. manual TIV plot, which is shown here for a scale factor of 2150: 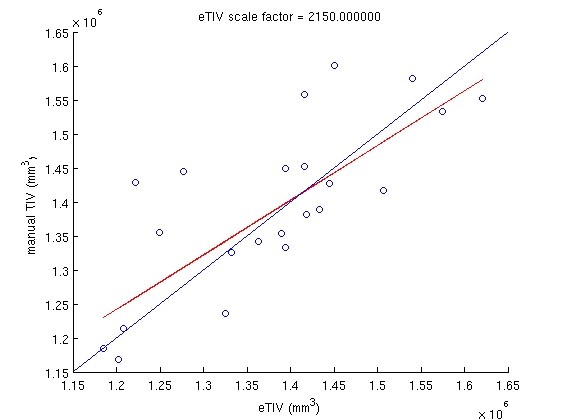 The eTIV vs manual TIV plot has a unity slope line which is the ideal (the blue line), that is, estimated TIV exactly equals the true (manually determined) TIV. The best fit line, in red, shows how close to ideal the variable 'eTIV_scale_factor' is doing to match this line. eTIV_scale_factor is adjusted iteratively to find the best match.