You will need to decide how much to smooth the data and whether you want to do slice-timing correction. In this analysis, we will smooth the data by 5mm Full-Width/Half-Max (FWHM) and correct for slice timing. The slice-timing for this particular data set was 'Ascending', meaning that the first slice was acquired first, the second slice was acquired second, etc. To preprocess the data, you could run a command similar to the one below.

If you accidentally run this command, you can hit Ctrl+C to cancel it. You should already have the output data available to you and can proceed to the next step. This command has several arguments:

The image below is an overview of the FS-FAST directory structure. This is an example of the kinds of files you should expect to see- naming conventions and number of files may be different. 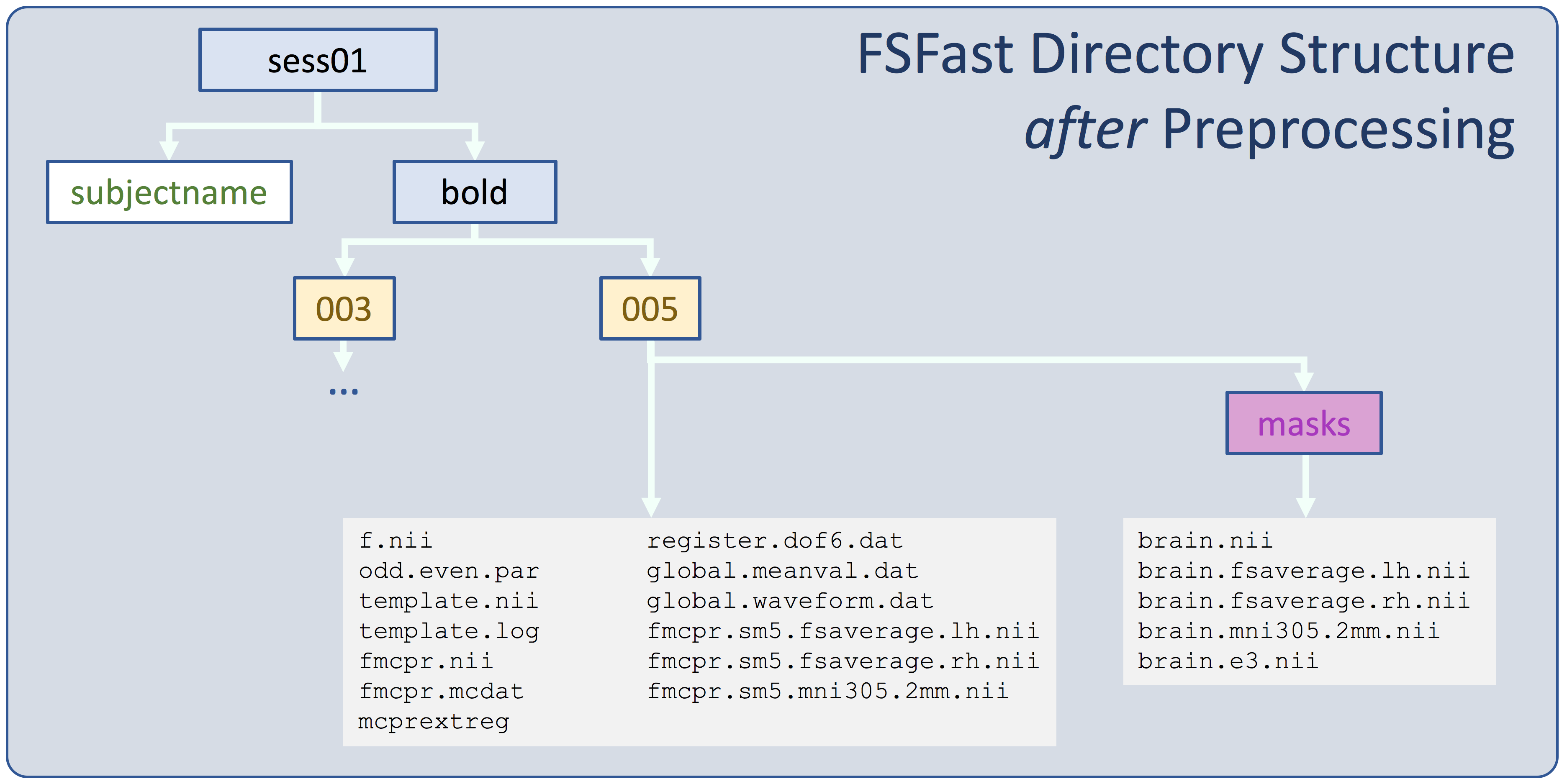 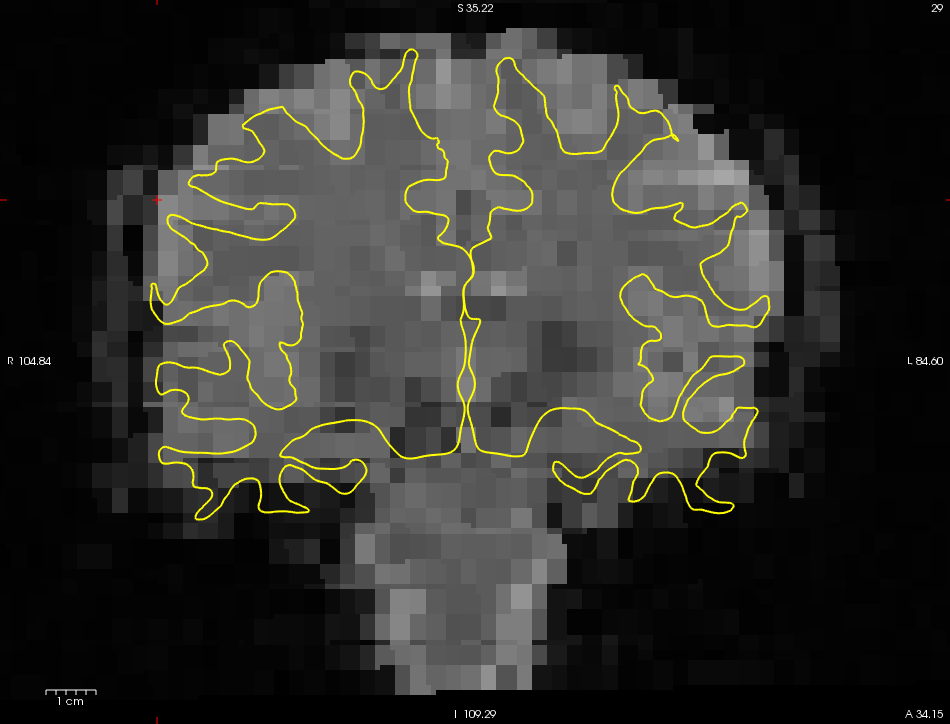 If you want to learn more about using tkregister or Freeview for registration, see the Multimodal Tutorial.

3. Preprocessing Details (You can skip this section or defer to the end of the FreeSurfer Course)

You do NOT need to perform the steps below to understand the rest of the tutorial. This is provided to allow you to understand the inner workings of FS-FAST preprocessing better. Go back into one of the run directories and see what preproc-sess creates. To do this,

Verify that it has the same dimension and resolution as the raw data using mri_info:

The masks for this run are stored in the 'masks' directory. Run ls -ltr masks. You will see a file called 'brain.nii.gz'. This is a binary mask created using the FSL BET program. There is also a file called 'brain.e3.nii.gz' which is the mask eroded by three voxels. The eroded mask is used to assure that the mean is only computed from brain tissue (this reduces edge effects). These have the same dimensions as the template. View the masks with:

You can play with the opacity of the mask by moving the opacity slider or entering a new value. Right now, the mask opacity is set to 0.75 (by including 'opacity=0.75' in the freeview command) so that you can see where there is overlap with the template volume. The brain.nii.gz is used to constrain voxel-wise operations. The eroded mask (brain.e3.nii.gz) is used to compute the mean functional value used for intensity normalization and global mean time course. There are other masks there that we will get to later.

By default, FS-FAST will scale the intensities of all voxels and time points to help assure that they are of the same value across runs, sessions, and subjects. It does this by dividing by the mean across all voxels and time points inside the brain.e3.nii.gz mask, then multiplying by 100. This value is stored in global.meanval.dat. This is a simple text file which you can view. At this point, this value is stored and used later. A waveform is also constructed of the mean at each time point (text file global.waveform.dat). This can be used as a nuisance regressor.

At this point, the functional data has stayed in the 'native functional space', ie, 64x64x30, 3.4x3.4x5mm3. Now it will be sampled into the 'common space'. The common space is a geometry where all subjects are in voxel-for-voxel registration. There are three such spaces in FS-FAST:

Each of these is the entire 4D functional data set resampled into the common space. The spatial smoothing is performed after resampling. Surface-based (2D) smoothing is used for the surfaces; 3D for the volumes. Check the dimensions of the MNI305 space volume:

The dimension will be '76 76 93 142' meaning that there are 76 columns, 76 rows, 93 slices but still 142 time points (same as the raw data). The resolution will be '2.0 2.0 2.0 2000' meaning that each voxel is 2mm in size and the TR is still 2 sec. The transformation to this space is based on the 12DOF talairach.xfm created during the FreeSurfer reconstruction. Check the dimensions of the Left Hemisphere 'volume':

The dimension is '163842 1 1 142'. This 'volume' has 163842 'columns', 1 'row', and 1 'slice' (still 142 time points). You are probably confused right now. That's ok, it's natural. At this point the notion of a 'volume' has been lost. Each 'voxel' is actually a vertex (of which there are 163842 in the left hemisphere of fsaverage). Storing it in a NIFTI 'volume' is just a convenience. The 'resolution' is '1.0 1.0 1.0 2000'. The values for the first 3 dimensions are meaningless because there are no columns, rows, or slices on the surface so the distances between them are meaningless. The last value indicates the time between frames and is still accurate (2 sec). The transformation to this space is based on the surface-based intersubject registration created during the FreeSurfer reconstruction.

This is the end of the first section of the FS-FAST tutorials. You can test your knowledge of the first part of this tutorial by clicking here for a quiz!