First, make sure you have pial_edits_before loaded in tkmedit:

Use the arrow keys to go through the volume slice by slice, and view the pial surface (red line) and white matter surface (yellow line). Notice the bright diagonal line in slice 157 that has caused the pial surface to expand past the actual pial boundary. This is the result of a bad segmentation incorporating a piece of the dura within the pial surface. 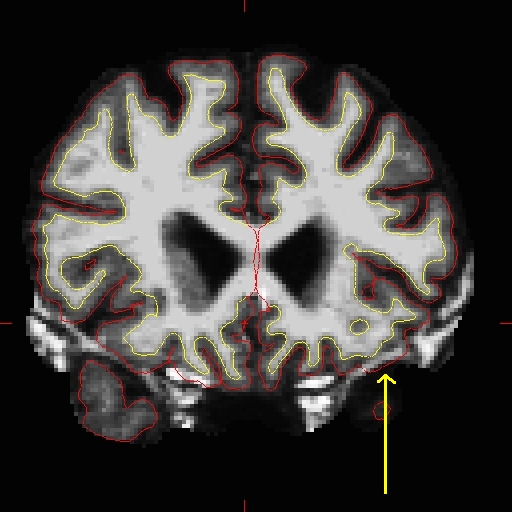 To fix this type of error you can simply edit away the offending voxels from the brainmask.mgz volume. To do this you will need to select the edit voxels tool and set the brush to a size and shape comfortable for you. A circle brush of radius 2 works well for this edit. In the tkmedit toolbar, go to Tools -> Configure Brush Info... Set Radius to 2, and Shape to "Circle". Close the configuration menu, and click the "Edit Voxels" button in tkmedit toolbar.

Find a place in the image where the dura is causing errors in the segmentation. Use the right mouse button to delete the voxels. It is not necessary to completely remove the dura to get an adequate pial surface, but it is good to do so until you are more familiar with manual editing. When you are finished removing the bright diagonal line in slice 157, it should look like this: 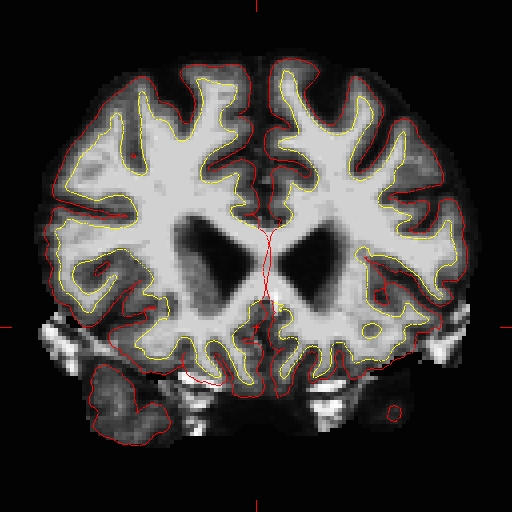 Continue on the other slices until the dura is removed.

Ctrl-z and Edit -> Undo Last Edit in tkmedit only allow you to go back one edit. If you remove too many voxels, you can use the clone tool to paint areas back in from the original T1 volume. Load T1 as aux volume. To paint voxels, go to Tools -> Configure Volume Brush... , in the tkmedit toolbar.

Set Mode to "Clone", and Clone Source to "Aux Volume". To change the size and shape of your brush, go to:

Select a radius and shape of the brush. Click the "Edit Voxels" button in tkmedit toolbar and use the middle button on the mouse to paint in voxels from the auxiliary volume

At any time, you can save the changes you've made to the brainmask.mgz volume by selecting 'Save Volume' in tkmedit's 'File' menu, and clicking 'OK'

You can check your result by viewing the brainmask.mgz volume in the pial_edits_after directory.

You do not need to do this for this tutorial. If you're interested, please refer to the brain.finalsurfs section on the Longitudinal Tutorial here.